There’s an interesting story behind this old rusted car painting, known as The Party Wagon.

For years as I walked my last dog Maggie down the back allies, kicking the ball along the way for her to chase, I always noticed this old rusted car half hidden by bushes in someone’s back yard. The colors of the car and the texture of the rust always intrigued me.

Many years later, I attempted to paint the car. My first attempt was a disaster, but learning from that first painting, I tackled it again, and this was the result.

Months later, a neighbor had a little get-together and invited a couple down the street, who just happened to be the owners of the old Ford Falcon! He told me all about his old car and the many good times and road trips he and his friends had in that old Ford Falcon back in the 1960s. He affectionately named the car The Party Wagon! Hence, the name of my watercolor.

Colors may look different on your device. Framed images and wall background colors are to give the viewer an idea of how it will look in a black frame on a wall.

High quality giclée prints are available in a variety of sizes. The prints use archival inks and are printed on fine art, lightly textured archival paper. Prints are shipped flat and do not include matting or frame. For more ordering information and prices click the button. 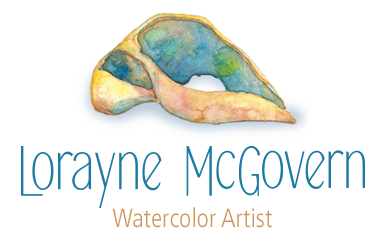 High quality giclée prints of any piece on my site are also available. Prints are on a lightly textured fine art paper and at affordable prices!

Please see my Prints page for pricing and more information.

Copyright © 2021 Lorayne McGovern | All Rights Reserved | All images are copyrighted © by Lorayne McGovern.
The use of any image from this site is prohibited unless prior written permission from the artist is obtained.